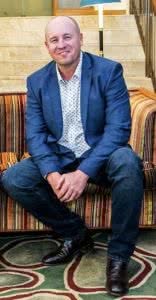 Mick Fabar is the founder and Managing Director of Green Homes. Mick is a fully licensed Master Builder having completed his carpentry apprenticeship in the heart Australia and later his Masters in Construction and Building Management at the Australian National University. He has won numerous MBA and HIA awards for his homes including National HIA Home of the Year in the Water efficiency and Energy Efficiency categories. Mick is also a 6 time boxing Guinness World record Holder and twice Motorex National Champion. Mick is a passionate supporter of children’s charities, sitting on the CWBoard of the Ronald McDonald House since 2005. Mick is married and with his wife Sophie, they have three children.

Not An Offer To Sell a Franchise
This website and the information contained on this website is for information purposes only, is not intended as an offer to sell a franchise or a solicitation of an offer to buy a franchise. The offering of a franchise can be made by prospectus only in the form of a Franchise Disclosure Document. In the states of California, Hawaii, Illinois, Indiana, Maryland, Michigan, Minnesota, New York, North Dakota, Oregon, Rhode Island, South Dakota, Virginia, Washington, and Wisconsin we will not offer you a franchise unless and until we have complied with applicable pre-sale registration and/or disclosure requirements.